5 conspiracy theories turned out to be true

A running discussion of conspiracy theories that  were later proven to be true and factual.

1. The Glomar Explorer and Project Azorian

In the summer of 1974, the Central Intelligence Agency (CIA) launched a mission to recover a sunken Soviet submarine in the Pacific Ocean. The resulting project became one of the most well-known classified CIA operations during The Cold War.

It began in 1968 when the Soviet Union sent a submarine carrying three nuclear armed ballistic missiles to its Pacific station, northeast of Hawaii. The submarine never made it, however, as it and its crew sunk to the bottom of the ocean more than 1,500 miles from America’s 50th state. In 1969, President Richard Nixon gave the approval for the CIA to recover the submarine. The mission became known as “Project Azorian,” and it was made possible by the Glomar Explorer.

To keep the mission hidden from the public, however, the CIA needed a cover. So they turned to billionaire Howard Hughes, who agreed to lend his name and his company — Global Marine Inc — to the project. In public, Hughes said his ship was being built to mine manganese nodules from the ocean floor.

In the years that followed, the CIA repeatedly denied the mission ever took place. In February of 1975, New York Times investigative reporter Seymour Hersh had planned to publish an expose on the mission, though the federal government convinced the paper not to publish the story. It didn’t matter, however, because a month later, the LA Times published their own version of the story. Still, the CIA denied the project ever took place — that is, until in 2010 when the agency finally declassified a 1985 internal-only article detailing the mission.

It turned out those who suspected and wrote about the federal government using a business mogul as the cover for a secret Cold War reconnaissance mission were right. In February of 1933, the Reichstag building in Berlin — which housed the German parliament — caught fire. The act was subsequently blamed on Dutch insurrectionist Marinus van der Lubbe, who was later executed for the crime.

The fire, however, was used as a pretext by Adolf Hitler and his Nazi Party to seize emergency powers. The newly sworn-in Chancellor of Germany argued that the fire was evidence that communists were planning to take over the German government. After convincing the German president to issue an emergency decree suspending civil liberties and granting Hitler special powers to confront the communists, Hitler had communist parliamentarians arrested, resulting in the rise of the Nazis to a parliamentary majority. From there, Hitler was able to move ahead and establish a dictatorship. The rest, as they say, is history.

In the decades following van der Lubbe’s execution, however, many publicly questioned whether he had actually been responsible for the fire, and suggested that the fire had instead been the work of the Nazis, who were eager to take control of the country. Several courts posthumously lessened van der Lubbe’s sentence and in 2008 he was officially pardoned of the crime. The pardon was made possible by a 1998 law that pardoned people convicted of crimes under the Nazis because Nazi laws “went against the basic ideas of justice.” 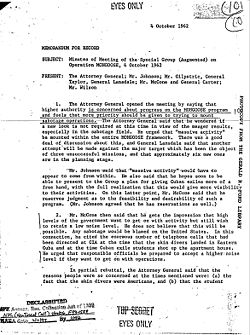 During the administration of President John F. Kennedy, removing communist leaders from power around the world was a top priority. Cuba’s Fidel Castro was a particularly important target, given Cuba’s proximity to the continental United States. Publicly, the Kennedy administration waged an ideological war against the spread of communism; privately, it was executing a secret battle known to only a very few.

The battle began in November of 1961 after the Bay of Pigs fiasco when Kennedy authorized aggressive covert operations against Castro’s regime. The operations included several attempts to assassinate Castro and discredit him to the Cuban people. One plan even called for the staging of fake assaults to justify U.S. military intervention in Cuba.

Suggestions for the fake assaults included things like “blow[ing] up a U.S. ship in Guantanamo Bay and blam[ing] Cuba,” and developing “a communist Cuban terror campaign in the Miami area, in other Florida cities, and even in Washington.”

But the Cuban Project — which was reportedly called off after the Cuban Missile Crisis — was a failure, evidenced by the mere fact that Castro is still alive today and Cuba remains in the hands of communists.

As political love triangles go, this one’s a dozy. The cast of characters include one-time presidential candidate John Edwards, his late wife Elizabeth Edwards and film producer Rielle Hunter. Add in the bizarrely attached longtime Edwards aide Andrew Young, and you’ve got a love rhombus, so to speak.

It all started in December 2007 when Young claimed to be the father of Hunter’s baby. Edwards had previously admitted to having an affair with Hunter, but denied paternity of the child in order to avoid having to admit he fathered a child while campaigning for the presidency and while his wife was battling breast cancer.

But the story of Young and Andrews, it turns out, is one of a sycophantic aide turned scapegoat for his idolized boss’ vices. In a tell-all book Young published in 2010, he revealed being taken advantage by Edwards, who begged him to claim paternity. The messy affair ended when Edwards finally fessed up. 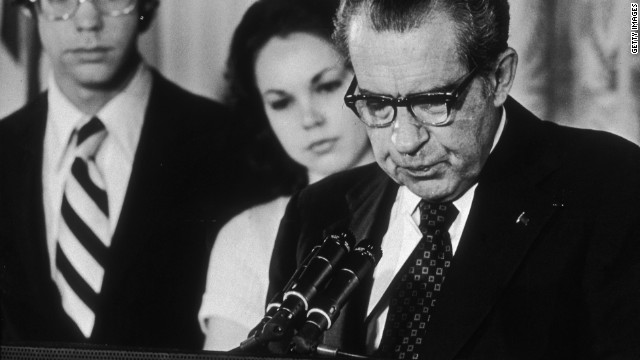 Last but not least is a presidential cover-up that ultimately resulted in a presidential resignation. The Watergate scandal — prompted by an overly-suspicious and paranoid president — consisted of the jailing of several prominent individuals, the eventual resignation of President Richard Nixon, and the ultimate test of the American psyche.

On June 17, 1972, five men were arrested for breaking into the Democratic National Committee’s (DNC) office at the Watergate complex in Washington, D.C. The men were subsequently tried and convicted of the crime. Afterward, however, it was discovered that all five of them had ties to the Committee to Re-elect the President (CReeP). Then, the question became what, if anything, did President Nixon know about the break-in?

In the months that followed, investigative reporting from the New York Times and Washington Post revealed what looked to be a conspiracy to cover up the break-in at the highest possible levels of government. Meanwhile, Nixon and members of his administration continuously denied any involvement.

Throughout the process, prominent administration officials were fired — some even indicted and sent to jail. The Senate launched an investigation into Nixon’s involvement and the Supreme Court ordered Nixon to turn over secret tapes from the Oval Office. Then, on August 8, 1974, while the House of Representatives was on the verge of impeaching him, Nixon resigned from the presidency.

Bill Gates is the top target for coronavirus conspiracy theories

US Major General Claims That A Missile Hit the Pentagon on 9/11, Not An Airplane

Forget Hillary ’s Emails, Here’s Her Real Scandal That Nobody is Talking About

Who are Really the Top Shareholders of Monsanto?